The Museum hosts an ide collection of archaeological findings from the entire prefecture of Halkidiki. Findings cover the period from the Bronze Age to the Roman period and come from Ancient Stagira,  Ancient Toroni, Pirgadikia, Afitos, Polygyros, Ierissos, Stratoni and the ancient city of Olynthos

Exhibits include clay figurines and coins from Olynthos, vases from Toroni, parts of the roof of the temple of Zeus Ammon from Kallithea, reliquary chests, fisherman's equipment, lamps, jewels and amphorae from Akanthos, now the town of Ierissos, and funerary steles and the statue of a woman from the 1st century BC, from the sanctuary of a deified hero, from Stratoni.

The museum opened its door to the public, this year (2019) with an exhibition of the collection of Ioannis Labropoulos. 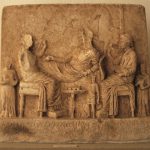 Finds from the city and the cemetery of Olynthos