Culture, Religious Tourism, What To Do

The Monastery of Zygou is one of the finest examples of the Athonite architecture found outside Mount Athos whose structure can be studied without impediments of posterior building phases and liturgical use.

The ruins of the former Mount Athos Monastery of Zygou are situated in the area of the village of Ouranoupolis, about 40 meters outside the nowadays border of Mount Athos. A very interesting and short walk from Ouranoupolis, the distance is only 2,2 km and it takes about 25 minutes.

The first known reference to “Zygou” in the Athonite peninsula comes from a document of 942 in which it is not specified if this name refers to a location, a monastery or a settlement. The first accurate report about its existence was in 992, when it was already an important monastic center with a  significant part in the operation of the Athonite state. 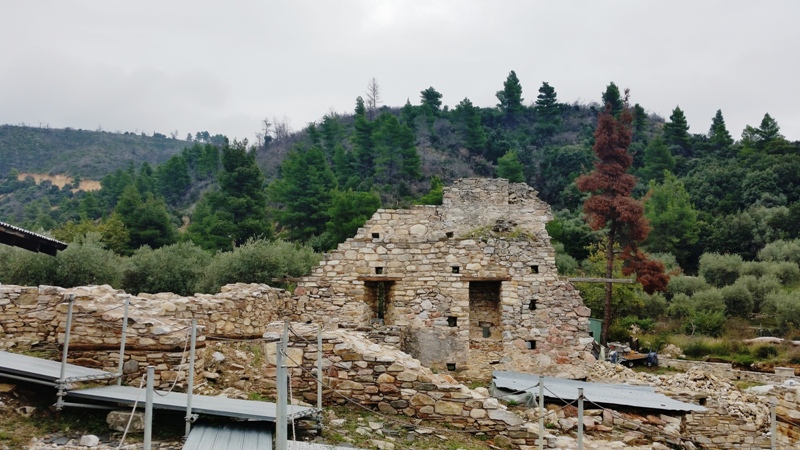 In 1018, when Nephon was abbot, its properties increased with the land granted by the Athonite community. At the same time, the building complex expanded and the new Catholicon (main church) was built. During the 11th century, the monastery was one of the most important in Mount Athos, highly ranked in the hierarchy.

It seems that the building complex found by the excavations, was built in a century. It is a five-side castle, fortified by ten or eleven towers. The monastery was abandoned in the late 12th century for unknown reasons and it was granted by a Golden Bull, together with its dependencies, to the reestablished Hilandariou monastery. In around 1206, a Frank lord who repeatedly attacked Mount Athos -event that stopped in 1211 by the intervention of the Pope of Rome- seems to have settled in the monastery. That is why the remains of the monastery were known and are often referred to –in maps also- as Fragokastro.

In the excavation site visitors will admire the castle, the towers and mainly the Catholicon of the monastery which is being excavated. The castle consists of five construction phases, all older than 1211. The surface inside the walls is 5,5 acres and the walls had 11 towers –some of which are being restored.

The excavation and restoration works are still in progress.

CULTURE NEARBY ACTIVITIES NEARBY NATURE NEARBY BEACHES NEARBY OTHERS NEARBY
Culture, Religious Tourism, What To Do