Akanthos was the colony of the city of Andros, which was built around 650 BC, one of the biggest and wealthiest colonies in Halkidiki and the most powerful harbour of the region, with its own monetary unit
(one of the most beautiful of its time).

Ancient Akanthos stretched in three hills of the Stratoniko mountain, in a 560-acre area, approximately 600m southeast from the Ierissos settlement. The walled city of Akanthos was named after the many thorns of the region
or after the thorn-formed shape of the fortification.

Its inhabitants joined forces with the Persian Army, then the Athenians and finally the Spartans. In 199 BC the Romans plundered the town, divided it in smaller properties and gave them to the legionnaires. At a certain point, the Romans were the only inhabitants of the area. They named the town Ericius (Erissos). The name later became Ierissos. 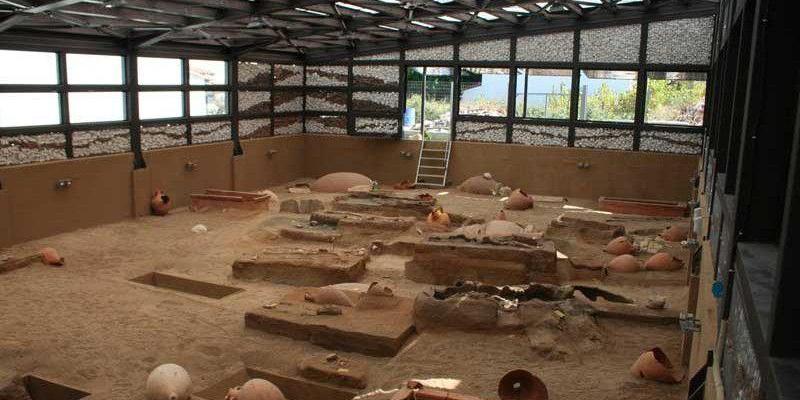 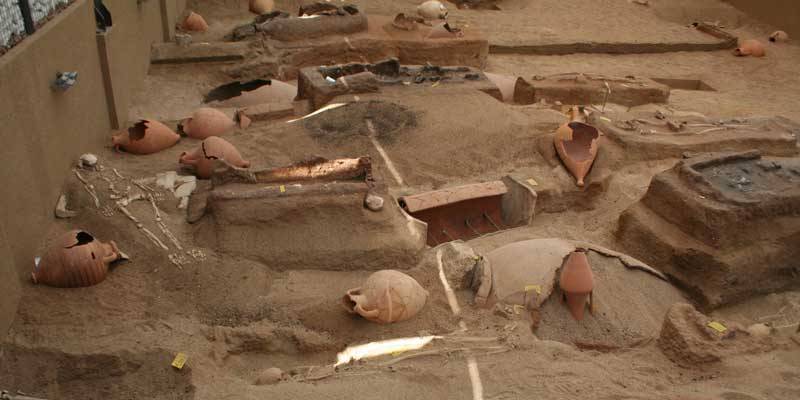 Akanthos is not excavated fully yet, but the research for the necropolis had started in 1973 and since then more than 1300 tombs have been currently recorded. The cemetery was used from the archaic period until the Roman period and probably with some interruptions until 17th century B.C. The tombs are in two or at least three superimposed layers, usually parallel to the coastline. According to the known ancient customs, children and adults were buried in the same place.

There are several types of tombs, such as simple or clay-coated, rectangular pits with clay urns or embossed or painting decorated, box-shaped, tile-roofed tombs.

Some burials in jars or smaller vessels are also recorded, which consist of the largest percentage of the children's’ and babies’ tombs. The funeral gifts are of great variety, most of them are clay vessels and many were the private property of the dead or were relevant to the profession or their occupation: among them, jewels, pins, brooches, mirrors, strigils, needles, hooks, knives, etc.

Clay figurines in the form of gods, cupids, actors, humans, animals are often found in women’s and mainly children’s tombs. Similar burial customs, tombs, and findings are found in cemeteries of other cities of Macedonia and Thrace.

The influences, the cultural contacts and the trading with the Greek-speaking countries of the East and the island centers of the Aegean Sea with Euboea, Athens, Corinth, and Boeotia are obvious. The workshops of Akanthos, where amphorae for the transportation of the famous “akanthio" wine were constructed, were situated between the ancient cemetery and the city.

Between the years 2007 -2013, a particular part of the cemetery was covered by a shelter for the in situ protection and designation of the antiquities.

The walls of the acropolis are the most important preserved ruins. The ruins, visible at present day, are mainly parts of the city’s fortification, ruins of walls, an impressive part of the acropolis, scattered architectural parts and structural ruins of the Hellenistic period, public buildings, houses and the foundations of a temple –probably of Goddess Athena- on top of the hill.