Destinations, Sithonia, Villages, What To Do, Where To Stay

It is believed that Toroni, the rocky peninsula has been continuously inhabited since Neolithic times.

This was one of the most important cities in ancient Halkidiki, which was destroyed in the 6th century AD by the barbarians. There are few traces of prehistoric settlements that have been found here, too.

This seaside village has few facilities regarding accommodation options mostly studio & apartments and a few tavernas on the promenade. But don't miss the sunset, take a romantic walk along the beach before you head back.

✓ Don’t miss it!
Snorkeling or scuba diving in Toroni is something special! Discover the remains of ruins from the ancient Toroni harbor that can still be found just some meters under the surface. 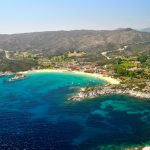 CULTURE NEARBY ACTIVITIES NEARBY NATURE NEARBY BEACHES NEARBY OTHERS NEARBY
Destinations, Sithonia, Villages, What To Do, Where To Stay