Monasteries outside of Mount Athos

Monasteries outside of Mount Athos

Halkidiki was introduced to Christianity in 50AD when the Apostle Paul passed through Apollonia on his way from Philippi to Thessaloniki. Christianity became the legal religion of the Roman State since the era of Constantine I (beginning of the 4th century AD) and during the reign of Theodosius I, it was proclaimed as the official state religion. Therefore, there are ruins of early Christian churches all over Halkidiki.

After the foundation of Mount Athos monastic community, Halkidiki became the most important religious centre for Orthodox pilgrims, while a lot of monasteries were founded during the Byzantine era.

Below you will find some of the most important monasteries worth visiting:

Located in the village of Zografou, just before the beginning of the peninsula of Kassandra, between Nea Silata and Nea Moudania.
The Monastery of Zografou was a dependency and some of its preserved buildings are the Byzantine tower dated from the 14th century, the main church built in 1842 and the fountain of 1853.

2) Monastery of the Annunciation of Theotokos in Ormylia (Sithonia)

Panagia Philanthropini is the Center for Social Advancement, Medical Prevention and Research, located near the town of Ormylia. The mother monastery, the Cenobium of the Annunciation of the God Mother, is a large monastic community with over 120 nuns from various nations—the majority of whom hold university degrees. The convent is a dependency of the Monastery of Simonopetra on Mount Athos. The Ormylia Art Diagnosis Center was founded in 1996 by the sisterhood of the women's monastery "to study and research the Orthodox Church.
For information call +30 23710 41278

The Monastery is about 2 km north of the village of Metamorfosi and it was founded in 1975 while now 50 nuns live inside. The buildings initially belonged to the old monastery of St Dionysios while the church was constructed according to the Byzantine architecture in 1981.
For information call +30 23750 61592

4) Monastery of Saint Arsenios the Cappadocian in Ormylia (Sithonia)

It is situated near Vatopedi village, between the Monasteries of Ormylia and St John the Baptist (Agios Prodromos). It was founded in 1986 and celebrates on the 10th of November. 14 monks live there. The Monastery is not open for visitors on Mondays, Wednesdays and Fridays. The rest of the days the pilgrims can visit it from 08:00-13:00 and from 17:00-20:00.
For information call +30 23710 41880

The Dependency (Metochion) of the life-bearing spring, which belongs to the Monastery of Hiliandary, is located about 5 km outside Stratoni, on the way to Ierissos, after the bridge of Kokkinolakos. The small, square Byzantine chapel is placed in the top of a high rocky cliff, surrounded by other buildings –such as cells, woodworking shops, manmade pond with a fish farm, and an open-air guest atrium, where visitors are welcome by the monks.

The Monastery is found about 2 km outside the village Arnea amidst beautiful, majestic natural scenery on the southeastern slopes of Mt Holomontas, with a view towards Mt Athos. The Monastery officially opened in 2001 and is operates for the public every day from 09:00-13:00 and 16:00-20:00.
For information call +30 23723 04064

7) Monastery of the Annunciation in Olympiada (East Coast)

It is located on the northeastern side of Halkidiki on Srtymonikos Gulf, near the village of Olympiada and ancient Stagira. It became a Monastery in 1993, dedicated to the Annunciation. Today, there are 3 nuns who live in the Monastery which operates daily from sunrise to sunset. One could say that the view of the lush green mountains is spectacular.
For information call +30 23760 51200

The monastery of Agia Anastasia Farmakolytria (St Anastasia the Curer) stands near Vassilika of Thessaloniki, at the foot of Adrianos, one of Mount Hortiatis's summits. It was built in 1522 by St Theonas, who became Metropolitan bishop of Thessaloniki. Back in Turkish domination, the monastery owned many acres of region’s land; thus, it was destroyed and rebuilt from scratch in 1830. Today, it belongs to the Ecumenical Patriarchate of Constantinople.
For information call +30 23960 22440 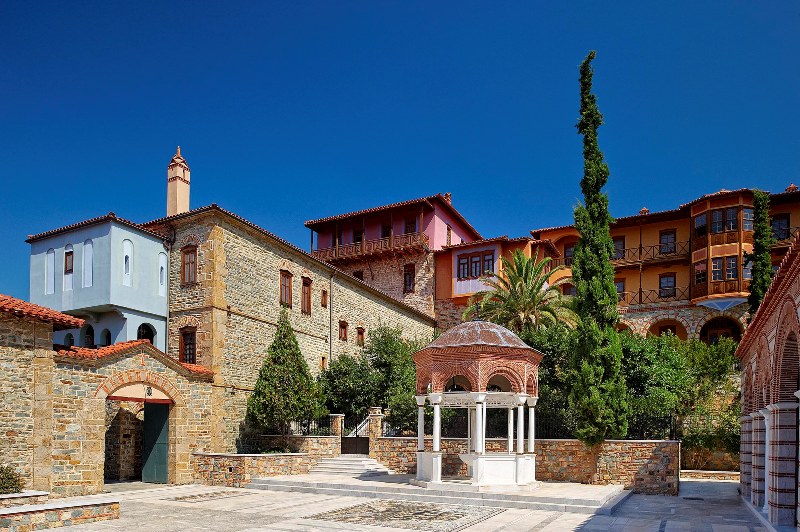 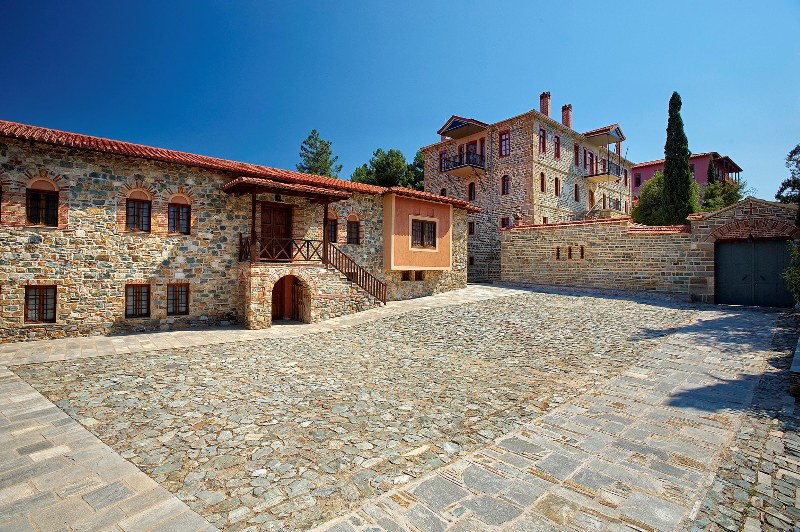 If you want to see an Athonite monastery of the 10th century, you should visit the ruins of Zygou Monastery
at the boarders of Mount Athos!