Culture, What To Dogame of thrones, sightseeing, Tower

The tower of Krouna is located approximately 1km outside the village Ierrisos. As with many of the other towers in Halkidiki, this one was also constructed to protect the surrounding metochi. This metochi was named ‘Koroni’ after the area where it was located and was related to the Serbian monastery of Chilandar at Mount Athos. Its purpose was to protect the metochi’s facilities, from the church of Prophet Elias, along the stream until the public road near the sea. Its name "Krouna" is the exact translation from Greek word ‘koroni’ (eng. crown)’ into Serbian and the tower is still known by that name today.

The tower is constructed in a square shape with a diameter of 7 meters. The current height is 12 meters. After the construction was completed, the tower must have been significantly higher.  Photos of the early 20th century show the tower with an additional floor.

The building material of the tower of Krouna, like the materials of the other towers in the area, were mainly obtained by the abstraction from buildings of the ancient city of Akanthos and the ancient Ouranoupolis.
The tower was protected by a fortified enclosure which also contained the warehouses, stables and the winery. Parts of the north and east sides of the fortification are preserved, with a total length of about 40 meters and a height of 2.5 meters. Further sections appeared to be deconstructed and removed as materials for newer buildings. 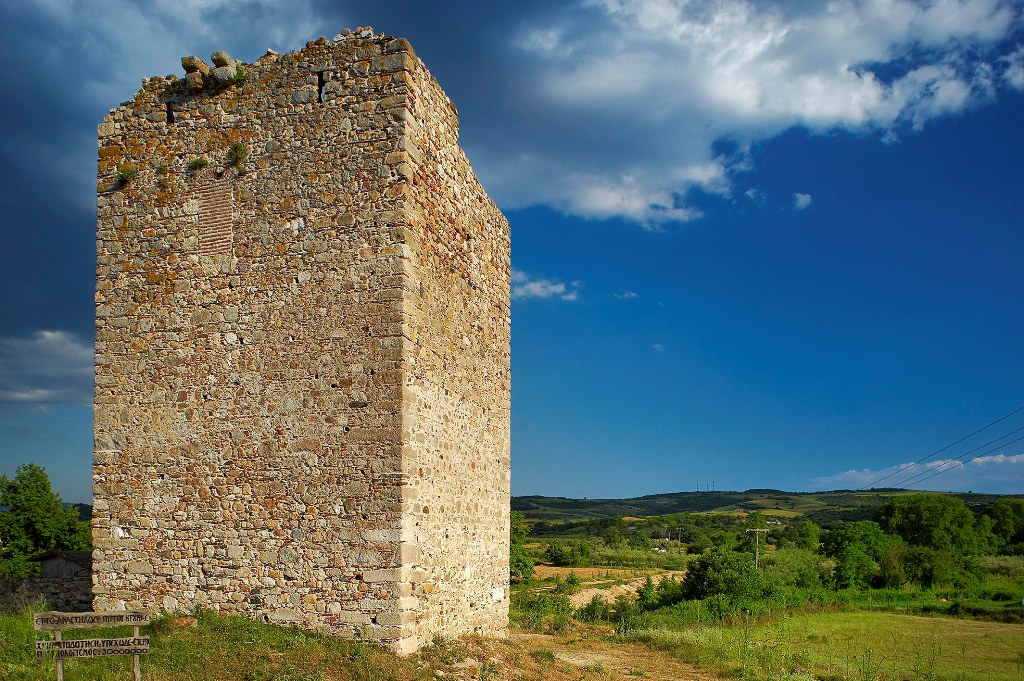 According to records found in the archives in a monastery at Mount Athos, the metochi was founded during the reign of the Serbian King Milutin in the early 14th century.

The first reference to the Serbian "metochi of Koroni" is made in 1320, during the reign of the emperor Andronikos II Palaiologos, when the monastery bought 68 acres of land in the area of ​​Ierissos and a tower in Chrousia.

During the reign of Tsar Stephen Dusan, in 1348, the tower and the metochi with its vineyards and fields are mentioned for the last time in Byzantine documents.

In 1423 the area passed into the hands of the Ottomans but this did not affect the status of the control.

In 1569, due to financial difficulties, the monastery was forced to sell the metochi and the tower to a priest of the area Mahala of Sidirokaussia (historic name of Stageira), who resold it to back to into Serbian ownership

In 1573 it was bought again by the monastery of Chilandar, which then sold it to two Ottoman brothers who again resold it to a Jewish resident of Sidirokausia, The metochi was obtained back to the monastery in 1719 which kept the ownership until the early 20th century.

In the revolution of 1821, the tower of Krounas as well as the neighbouring towers were set on fire under the command of Pasha Mehmet Emin. The tower lost its strategic importance and has not been used ever since.

In the late 1990s, wooden floors and stairwells were reconstructed and a hidden interior roof was installed to use the building as an exhibition space.

CULTURE NEARBY ACTIVITIES NEARBY NATURE NEARBY BEACHES NEARBY OTHERS NEARBY
Culture, What To Dogame of thrones, sightseeing, Tower