The Museum is housed in the building known as the Yiatradiko, one of the oldest listed buildings in Halkidiki (1750-1755).

It is a two-storey structure, built in the Macedonian style with a tower and projecting balcony.

The ground floor has an exhibition of agricultural artifacts, photographs from the period 1880-1950, various items used in the daily lives of the local people, as well as implements used in beekeeping, building, baking, etc. The mezzanine floor houses a collection of carpenter's tools and items from the traditional coffee house. On the upper floor, the visitor can inspect a loom and various pieces of equipment used in weaving, as well as an old fireman's pump, local costumes, weights, a brazier, washing boards, etc. There is also a special room which recreates a traditional Arnea domestic interior. 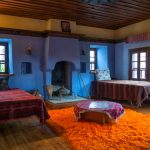 Houses as they used to be

Inside the Historical & Folklore Museum of Arnea