Galatista is a small town in the mountainous area that definitely deserves to be visited any time of year.

The town has great historical interest since it has several churches and mansions. The most famous and the main attraction is the Byzantine tower. It dates from the Venetian period and it is connected with the Mount Athos. Possibly, it was used for the storage of water of the area. A clue for this is that two water mills were discovered in the immediate vicinity.

Galatista village is dated back to 9th century when it was known as “Galatissa”. Then, the Anthemous city that ruled the surrounding region was also called with the same name. Nowadays, it remains a very picturesque village with narrow alleys, old houses and beautiful churches; famous for its icon painters who decorated the monasteries of Mt. Athos and other churches. 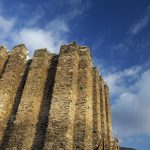