Calling all foodies! The internationally acclaimed Sani Gourmet, hosted each year at the award-winning Sani Resort, will be returning again to Halkidiki, Greece between 10th-14th May 2019. At this year’s event, the resort will proudly welcome eight Michelin-starred chefs from Greece and around the globe, holding a collective 15 Michelin stars and showcasing the crème de la crème of the culinary world and the industry’s emerging gastronomic talent. This year will see Sani Gourmet return for its 14th year and promises to showcase the very best in gastronomy.

Each year, Sani Gourmet invites foodies from far and wide to sample the sumptuous and diverse dishes on offer at Sani’s top restaurants; Water, Fresco, Katsu and Byblos. Michelin starred chefs will cook up a storm, creating an array of contemporary dishes that are vibrant, delicious and refined, showcasing the most up to date gastronomic trends and techniques. Culinary connoisseurs can enjoy the wonderful assortment of aromas and flavours on offer at Sani Resort over the course of the five-day event, with each dish accompanied by a selection of the finest local and international wines.

Among the chefs taking part in this year’s festival are Thomas Bühner, three Michelin starred chef, who has been one of Germany’s top chefs for more than 20 years, and Stephanie Le Quellec, two Michelin starred French chef who was the deserving winner of Top Chef France 2011. Manjunath Mural, the first Indian chef to score a Michelin star in Southeast Asia, will be wowing guests with his South Asian flavours, whilst Latin America will be represented by one Michelin starred Rafa Costa e Silva whose restaurant Lasai was awarded a seventh place in Latin America’s 50 Best Restaurants. 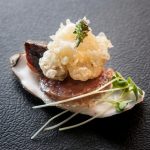 Have a taste of something spectacular and choose from a diverse selection of cuisines, from Europe and America to Asia and Australia, and enjoy award-winning gastronomy with Sani Resort. Guest experiences will also be elevated by wine and champagne pairing, meeting the chefs behind each dish and a host of other activities taking place over the five-day event.

A full programme of events taking place across the five days will be released shortly.