In music, a pause affects the timing of the next note – as well as its dynamics.

In the same way, Sani Festival is making its spectacular return after a brief pause, to remind us how powerful music is, how important it is to resume, how essential it to congregate.

New creators and living legends from the international scene, as well as Greek artists with impressive track records, come together in a programme filled with the rhythm, the melody and the pulse of an institution that stays true to its values and features: originality, high aesthetics and quality, and bridging hospitality and culture. 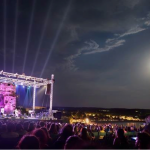 Sani festival up in the hill 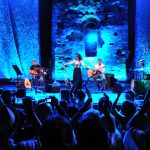 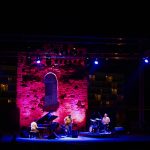 Thus, Sani Hill, at magical Sani Resort in Halkidiki, will be bathed in the light once again, becoming the backdrop for our summer meetings, where the sea, the sky and the green coexist in harmony. Together, these elements comprise the ideal conditions to enhance the sounds of art, creating experiences that feel magical, almost ritualistic, bringing back the magic of the Sani Festival, which has left its mark on the country’s cultural map.

Just before it celebrates its 30 consecutive years, Sani Festival is marked by a great absence; that of its Artistic Director for several years, Olga Tabouris-Babalis. The return of an institution that she has served and promoted with such passion could not but be dedicated to her.

Charismatic trumpeter Avishai Cohen will raise the curtain of this year’s Sani Festival and its flagship Jazz on the Hill section. An artist heavily influenced by Miles Davis, Cohen launched his home-grown band, Big Vicious, six years ago, after relocating from the US to his native Israel and rounding up musicians who helped him shape the music from the ground up. The group is an association of old friends, who have jazz music as a common background, but also bring to it their own music statement in a creative fusion that becomes part of the band’s sound. Textures from electronica, ambient and psychedelia music are part of the blend, along with grooves and beats from rock, pop, trip-hop and more. “An instrumental master and a composer of vivid originality” as the Guardian write, Avishai Cohen – who “has rather quietly become one of the most creative trumpet players in jazz”, according to JazzTimes – is about to climb up Sani Hill for a magical concert to mark the festival’s comeback.

An Evening with Branford Marsalis

Saxophonist, composer and bandleader Branford Marsalis, one of the most influential and revered figures in contemporary music, and a living jazz legend will mark the second Jazz on the Hill concert for 2021. The NEA Jazz Master, Grammy Award winner and Tony Award nominee defines the Branford Marsalis Quartet as the core of his musical universe. After more than thirty years, this celebrated ensemble is revered for its uncompromising interpretation of a multifaceted range of both original compositions, and jazz and popular classics. Their latest album, The Secret Between the Shadow and the Soul, finds the quartet at a new peak, capturing a kaleidoscope of moods with inspiration in what is their most emotionally wide-ranging and melody-driven collection to date. Encapsulating Branford Marsalis’s vision, this album is sophisticated, adventurous and captures a great band sounding better than ever. As Jazziz Magazine states, “Branford Marsalis’ quartet has been a model of daring, unapologetic artistry for the past three decades”, and Sani Festival is honoured to welcome them in Greece.

Stefanos Korkolis climbs onto the stage at Sani Hill to share the notes to his personal Music Stories, joining forces with an exceptional performer, Sofia Manousaki. They feature songs he has written and performed, songs he wrote for others, songs he has arranged, songs he has adapted and songs he simply loves. It is a musical journey with stops at his most popular melodies as well as gems by prominent Greek musicians, including Mikis Theodorakis, Manos Hatzidakis, Stavros Xarchakos, Manos Loizos, Mimis Plessas, Giannis Spanos and Afroditi Manou, as well as popular hits from the international pop, rock, blues, jazz and world music stage. Highlighting eclectic affinities between diverse sounds – such as linking Ray Charles’s “Hit the Road Jack” and Astor Piazzolla’s “Libertango” to popular Greek entechno and laiko songs – Stefanos Korkolis’s Music Stories bring together audience and musicians for unexpected twists and turns and inspired improvisation.

The world-famous percussionist Mino Cinelu is going to showcase his virtuosity on the stage of Sani Hill on the last Saturday of July. He has cooperated with plenty of talented musicians, like Sting, Miles Daves, Stevie Wonder, Lou Reed, Kate Bush, Dizzy Gillespie, Branford Marsalis and many more. In fact, he has probably played the percussion on most of the music you hear while enjoying a drink in a café. He has released four albums under his own name and appeared on countless more records as a composer, co-leader, guest or sideman. In 2020 Mino Cinelu joined forces with Norwegian trumpetist Nils Petter Molvaer, and they released a unique duo recording titled SulaMadiana. The record is a swirl of dub reggae, Nordic and Caribbean rhythms. Mino Cinelu revisits his classics like Confians among other new compositions surrounded by an all-stars lineup composed of Janysett McPherson, Alune Wade and Luca Aquino. Considered as one of the best percussionists in the world, the brilliant multi-instrumentalist is back with a unique and captivating musical journey beyond the roots of jazz.

Richard Galliano, a renowned French accordionist of Italian heritage, brings to Sani Hill the melodies of this lyrical melody of his instrument, blending them with the unique landscape of Sani’s medieval tower. He has famously developed the traditional expression of the accordion, giving it refreshing new life through French jazz. Drawing great inspiration for the French music traditions, especially the musette waltz, Galliano also takes his music to new contemporary places inspired by jazz, blues, tango and Brazilian music, thus blending melody with feeling, emotion and atmosphere. Playing along with his father at the early age of four was the starting point of a long and fruitful career that has taken him all around the world. He has recorded over 50 albums and performed with legends like Chet Baker, Gary Burton, Ron Carter, Astor Piazzolla, Jan Garbarek, Charlie Haden, Wynton Marsalis, and many more. After 30 years, he took a couple of years to mark his stand with his New Jazz Musette album, once and for all emphasizing his everlasting creative and enthusiastic approach to jazz.

Brazilian-Greek Katerina Polemi, who has made a splash with her music, songs and her unique stage presence, has invited her wonderful friends – singers, creators and musicians – to a concert that will sprout Flowers on the Hill of Sani. It is set to be a colourful show; an evening filled with youthful drive, humour and virtuosity, sounds and rhythms from the world. Young artists coming together in freshness, togetherness and companionship: the magical Maria Papageorgiou, who has a rare ability to add strength and emotion in everything she performs; the unique Pavlina Voulgaraki, who creates a dreamlike atmosphere in her songs and in her concerts; the self-luminous Themos Skandamis, with his unexpected, smiling songs; and the young Dimitris Kopsis, with his voice almost tender. Joined by a band of four exceptional musicians, they are promising to take us away to a celebratory outing to many different corners of the planet – spending a little more time on the bright musical roads of Greece as well as Brazil.

JukeBox – The Songs We Grew up With

One of our country’s most prominent musicians, Nikos Portokaloglou has set up an outstanding programme this year, which features songs from his entire career plus new compositions as well as covers of older songs by leading Greek and international composers, which all power a living jukebox on the stage: a concert filled with nostalgia and optimism, colourful and vibrant, spanning songs from across eras and languages – “songs we grew up with, songs that made us what we are”. Along with Ble, Stathis Drogosis, Agapi Diaggelaki, Vyron Tsourapis, Thanasis Tsakirakis and Ilias Lampropoulos, they are a unique group of friends ready to transport us to almost every facet of the musical spectrum. Can you fit on one playlist “Knocking on Heaven’s Door”, Greek ‘70s hit “To Koritsi tou Mai”, “Dancing Queen”, “Odi ston Georgio Karaiskaki”, “Pano ap’ ta Synnefa” from 1988, “Should I Stay or Should I Go”, “Poso Se Thelo”, “Wish You Were Here”, “Min to Peis Pouthena”, George Dalaras’s “Skoni”, “Thalassa Mou Skoteini” and “Let it Be”? The answer will be given on Sani Hill!

A journey to music and the visual arts

Classical music meets the visual arts in a retrospective of the Russian Avant-Garde – one of the most influential movements periods of modern art and among the most interesting creative periods in history, which developed in Russia in the first decades of the 20th century. MOMus–Museum of Modern Art’s Kostakis Collection, featuring 1275 works of important artists of the Russian Avant-Garde (Kazimir Malevich, Vasilii Kandinsky, Liubov Popova, Vladimir Tatlin, Olga Rozanova, Aleksandr Rodchenko, Solomon Nikritin, Nadezhda Udaltsova, Gustav Klucis etc.) meets the music of Transcription Ensemble, one of the most ever-evolving music groups in Greece. Under the title Sani Meets the Russian Avant-Garde, this concert will feature a chamber music repertory that is as important as it is rare – made up of Russian Avant-Garde Composers such as Georgy Catoire, Nikolai Roslavets, Arthur-Vincent Lourié, Sergei Prokofiev, Aleksandr Scriabin and Paul Juon – together with synchronised projections that present the Kostakis Collection artwork, as well as the era and the collector. It is a themed performance for two senses that will use music and visuals to transport us to a bygone era.