After a year of absence, the 6th Parthenon Film Festival – Cinema in the Village returns faithfully to its promise paying tribute to what we have missed lately, the hug! Due to the restrictive measures of the pandemic regarding the organization of events, the Festival temporarily changes its roof. The screenings for this summer will be hosted at the Open Air Theater of Neos Marmaras, with a certain number of seats and observance of all the necessary sanitary measures.

Last year’s conditions were unprecedented and the need for extroversion remained on the shelf for a while. But now, after a year, the need for contact is more urgent than ever. Contact with others and Art.

The 6th Parthenon Film Festival – Cinema in the Village returns on July 9 for a three-day full of cinematic hugs, for a tribute that had to wait for a year, and maybe the hugs will be tighter.

William Wyler’s “Roman Holiday” opens the festival’s program on Friday, July 9, at 9:30 p.m., with the dazzling and Oscar-winning First Actress Audrey Hepburn and Gregory Peck. The film, an archetypal romance, follows the adventure of Princess Anne in Rome, who when in despair of the imperative protocol runs away to find herself on the couch of an ambitious journalist.

On Saturday, July 10, the program begins with the short film “The Forest” by Giannis Akrivopoulos presenting a young man who confuses reality with his dreams and is followed by “Volver” by Pedro Almodovar, which stands as the backbone of this year’s festival, offering the most generous hug in the recent narrative cinema. The film that won the Cannes Film Festival’s Best Actress award for all its protagonists, is the story of Raimunda, who while trying to protect her teenage daughter, will see her mother “return” from the world of the dead.

The festival closes on Sunday, July 11 with the most mysterious hug, the most romantic, the most naive. Sofia Coppola’s Oscar-winning Original Screenplay, “Lost in Translation,” follows a middle-aged actor to Tokyo and his encounter with a young girl, who sees her days pass aimlessly waiting for her companion photographer to return to the hotel. When the two of them meet, the most accidental love that defined an entire generation is born.

The film screenings* start every night at 21.30. Admission is free for everyone. 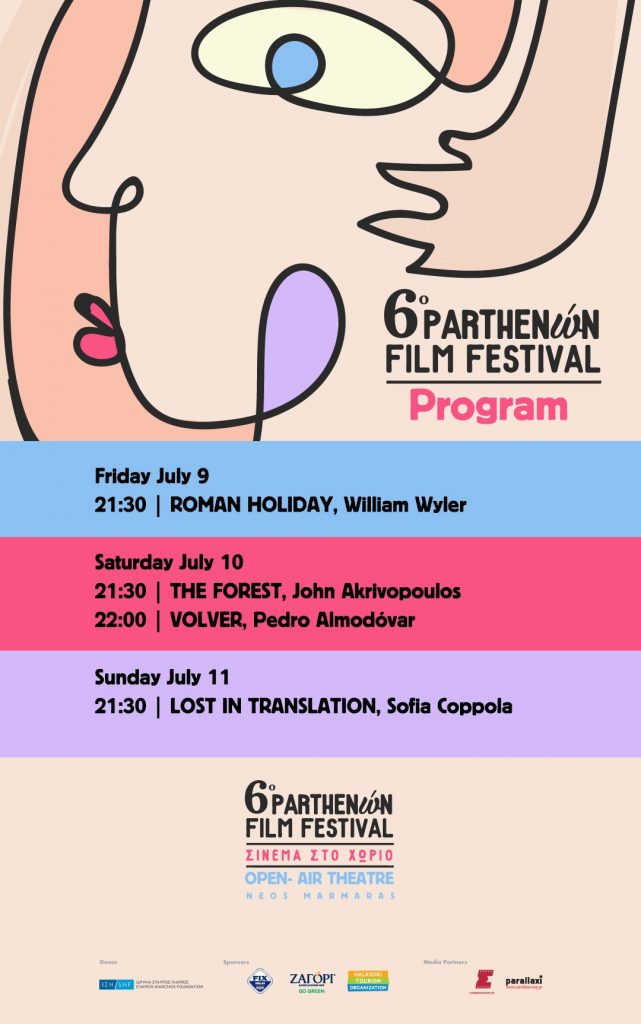