Destinations, Sithonia, Villages, Where To Stay

Porto Koufo is a quiet seaside village on Toroneos Gulf that is the perfect place for relaxing vacation.

There are huge rocks, rising above a bay, which looks like a lake since the small opening to the sea is almost invisible. When it comes to the coast, it is steep rocky one with amazing caves while there is a unique secret gem which can only be reached by boat. German submarines were stationed here during the Second World War (WWII) because of the large depth of the harbor but also because of its geographical location that offers direct access to the Aegean Sea.

The little village of Porto Koufo has a couple of hotels, some rooms to let having a great view to the harbor, and some small traditional tavernas serving tasty Greek cuisine.

✓ Don’t miss it!
- Go on scuba-diving underwater the cave “Erica” and explore the old Turkish pirate shipwreck, down to 35 meters depth.
- Admire the deepest natural harbor of Greece by walking uo to the summit of Kapros, an easy 4klm circular route. 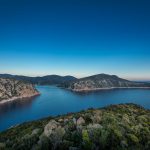 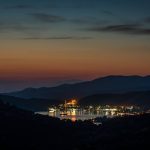 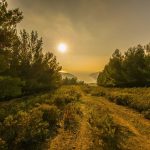